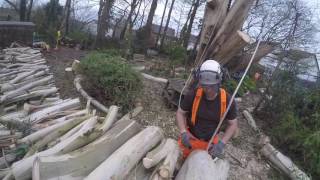 This is Non Native Species Week! ETGS has successfully completed the 'Introduction', 'Identification & Recording' and 'BioSecurity' modules of the training provided by The Non Native Species Secretariat. Biosecurity is about reducing the risk of introducing or spreading invasive non-native species (and other harmful organisms such as diseases) in the wild. It is estimated that an average of £1.7billion per year in the UK is lost to the negative effects of non native invasiv

GreenMech is the professionals’ choice of wood chipper because with 25 years of UK based design and manufacturing it provides the best option for a unique and innovative machine with comprehensive guarantee and dealer support to ensure productivity and reliability. GreenMech employs over 85 people in the heart of the UK’s manufacturing and engineering region. A family owned and run business with a Midlands based factory; GreenMech was the winner of the prestigious 2005 Que